April 12, 1949 – October 14, 2022
In loving memory ~
It is with great sorrow that we announce the passing of a great man, Rick Jackson, who has left a huge hole in the lives of those who knew him.
Left to grieve for him are his loving wife, Marjan, his children, Tammy and Brad, step children Jason (Melissa) and Michelle (David), his adored grand children Josh (Hannah) and Olivia, brothers Rob (Laura), Gene (Mary) and sister Lisa (Jeff dec’d), step grandchildren Logan, Victor, Makayla and Lincoln as well as his former wife Pamela, a very large extended family and an amazing amount of really dear friends. Rick was predeceased by his parents, Robert and Margaret Jean Jackson.
Rick Jackson grew up in Sidney, BC on the Saanich Peninsula. He was the second of four siblings, 3 boys and 1 girl, keeping his mom, Jean on her toes.
After completing grade 9 and at the young age of 15, Rick decided he was old enough to set out on his own. He spent that summer kicking around the Okanagan picking fruit and doing odd jobs. When the summer was over, he found himself living in an old hotel in the downtown eastside of Vancouver. After watching what kind of life he would have living down there, he made a promise to himself that he would never be there again. He returned to Victoria and a few years later met his first wife, Pamela Abbott.
Rick and Pamela married in March of 1971 and settled in Gold River on the north end of Vancouver Island. Shortly after moving there, they welcomed their first child, a girl named Tammy and a few years later a boy, named Brad.
Along with working at the Gold River Mill, Rick owned a dump truck, backhoe and a rock crusher. For years he would work his mill shifts and then go out on his own, working his machinery. After 5 years of hard work and trailer living, Rick had saved enough money to move his family to Royston and in 1977 he bought his first house with cash. An achievement he was very proud of.
For many years he worked all over Vancouver Island with his logging and dump trucks.
In the early 1980’s Rick and his partner bought a pole yard called Island Pole and Piling Ltd. Rick worked very hard to build this business up and it became very successful, shipping poles and piling all over the world.
Rick was a visionary, and he had his sights set on the Crown owned property at the top of Ryan Road in Courtenay. With his partner he purchased that land which today is known as Crown Isle Resort & Golf Community. Rick knew that the 872-acre parcel of land would change the face of the Comox Valley and it really has with various commercial developments and many residential homes.
Rick was a details man who was incredibly hard working. He oversaw the design and build of the 48,000 sq ft Crown Isle Clubhouse paying close attention to every detail from gold plated fire hydrants to seamless window views from the restaurant overlooking the 18th hole of the golf course. Often employees would mistake Rick for the janitor at the clubhouse because he was just as comfortable fixing a broken ice machine as he was running a multi million dollar company.
Rick was an adept negotiator with a broad knowledge of building and residential planning. He was extremely intelligent and had a thirst for learning. Rick could discuss any topic with you….not bad for someone with a grade 9 education!
Rick was a very humble and giving person who loved his family and his dogs. He could cook a mean turkey dinner and fix your car in the same day.
He had such an amazing big heart and really cared for the more vulnerable people he met throughout his years, doing so many things to help people without them or anyone else knowing. He was generous to a fault.
Rick met his second wife, Marjan in 2007 while he was doing business at her workplace and he recognized her maiden name, realizing he had worked with her father in Victoria when he was 18! Rick and Marjan started dating in 2009 and married in 2010. Rick was the love of Marjan’s life and the feeling was mutual.
Rick and Marjan were able to travel the world together making so many wonderful memories in all the countries they saw, as well as in their little motor home travelling around B.C.
Spending time in La Quinta is where Rick really relaxed and just enjoyed the sun and having water gun fights with his grandkids in the pool. He was a great big kid at heart! You could always tell when Rick was up to something cheeky when his little smirk appeared and his eyes started twinkling.
Rick always gave the best hugs and loved his family, making sure to host family dinners at Easter, Thanksgiving and Christmas, serving his famous sausage stuffing and in the summer months, his potato salad.
He enjoyed his many cars, car shows and was a member of the Comox Valley Classic Cruisers for many years. He helped organize the Comox Valley Classic Cruisers July cruise on several occasions.
We would like to send a great big thank you to all the first responders for their care and compassion during this extremely difficult time.
A celebration of Rick’s life will be held on October 28th at 40 Knots Winery located at 2400 Anderton Road in Comox, BC from 2-5pm. To honour Rick’s love of colourful plaid shirts, please either wear a plaid shirt or bright colours. 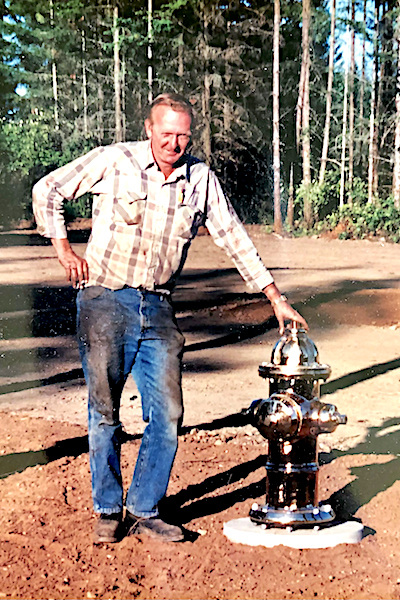