Hope went to join her husband, Walter, a few days after suffering a significant stroke. By her side was her niece, Lynne Kreller, who (with her husband, Barry) had been a constant in Hope’s and Walter’s lives since they moved to Vancouver Island.
The youngest of five children, Hope grew up on the family farm. After high school, Hope followed two of her sisters into nursing. She enrolled in Dauphin General Hospital’s School of Nursing, where she made lifelong friends, especially Tella (nee Presunka) Roddey. She graduated in May 1950 and began her career at the Hospital. On one of her train trips to Flin Flon, MB to visit her sister (who was nursing there), she was “chatted up” (family lore) by the handsome train conductor (Walter Bednas), who showed up with a bouquet of yellow roses and a ring not long after they started dating. They married in Dauphin in June 1953 (the ceremony performed by Walter’s uncle, Father John Bednarz) and settled into life there. Walter worked for Canadian National Railways and Hope continued at the Hospital. Their only child, daughter Marianne (husband Graham Bruce), was born there in 1956.
Hope continued nursing through their various moves, finishing at the Peace River Municipal Hospital. She worked in in many of its departments including Pediatrics (where she became Director), Obstetrics, and Emergency. She also filled in for various services (such as ambulance/ medevac) as needed.
Hope retired in 1987, after which she and Walter relocated to Comox, BC (on Vancouver Island), where they enjoyed almost 30 years of Island life. A milder climate meant family and friends were only too happy to visit them. It also led Hope to ex her gardening muscles, trying fruit trees (leading to expanded canning and preserving skills) and a wide range of coast-suitable perennials. She also learned how to keep the Island deer from treating her plantings as a buffet.
Over time, both Hope and Walter developed health problems which necessitated relocation to a care situation. They moved to Qualicum Manor (at Qualicum Beach, on the Island) where they received warm and personal attention until their respective passings. Niece Lynne Kreller (and her husband, Barry) lived nearby and were able to keep in regular contact with them between visits from daughter Marianne (and her husband, Graham). Hope has been cremated and her ashes will be interred with Walter’s in Manitoba later this year.
In Hope’s memory, the family requests that any donations be directed to either the Crohn’s and Colitis Foundation of Canada or to your local animal shelter.
Comments and condolences can be sent to the following email address: mbruce@ccinet.ab.ca. The family wishes to acknowledge the attentive care that both Hope and Walter received from the sta at Qualicum Manor during their time there. 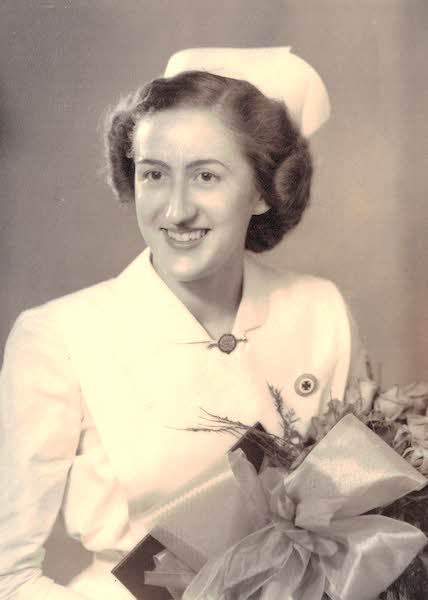