April 7, 1931 – November 9, 2022
In loving memory ~
It is with overwhelming sadness, that we announce the passing of our Father, Frank William Fischer, on November 9, 2022. Pre deceased by his wife, Joey Fischer (nee Poirier), in 2013, and his siblings Bill and Florianna (Perky). Left to grieve and celebrate a life well lived, are his children Terry (Cess), Randy (Indra), Cheryl, and his brother Tony.
Frank was born in Macklin, SK, raised on a farm, which engrained early on, an unwavering work ethic that he maintained his entire life. After losing his Father at a young age, the family moved to Kirriemuir, Alberta, where they managed a local hotel and saloon. As a young boy, he would sweep the saloon floors before collecting eggs, which he would deliver on his bicycle, en route to the one room school house, where he would light the wood stove, prior to class. He was occasionally was sent home from school, suffering from relentless hiccups and unable to stay awake. It had something to do with sweeping the saloon floors.
As soon as he was eligible, he joined the RCAF as a radar technician. While stationed at CFB Clinton, Frank met the love of his life, a petite Acadian/French RCAF photographer, hailing from Bouchtouche, NB, Jeanette (Joey) Poirier. A romance ensued, and they were married on November 19th, 1955. Within 9 years, and several overseas postings, they were a family of 5, that eventually settled in the Comox Valley. They cherished their home on the Puntledge River, where lasting memories and good friends were made easily. Frank maintained many life long RCAF friendships and thoroughly enjoyed being an active member of 19 Wing Comox. He was also a life long member of the Fish and Game Club, and a regular on the sheets of ice at the curling rink.
Paramount to Frank, was his family. He leaves behind a legacy steeped in kindness, compassion, service to others, humour and last but not least, The Happy Hour.
There will be no service at this time. A Spring gathering for the internment of ashes for both Frank and Joey will take place, where they will at last, be reunited, together, forever.
Please raise a glass to his beautiful life, that was so well lived.
Condolences, memories and photos may be offered to the family at frankhasleftthebuilding@gmail.com 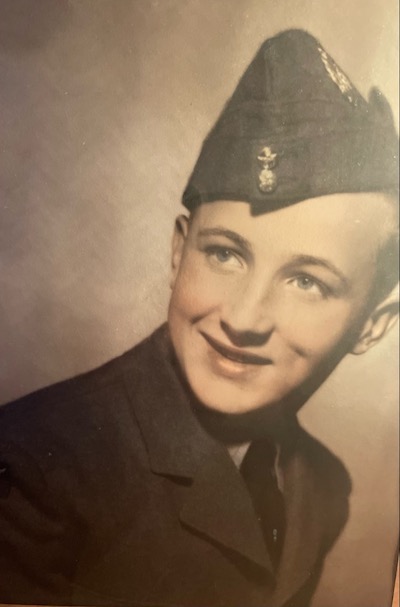