The Harbour City has officially entered the jet age.

A twin-engine Airbus A319 landed at and departed from Nanaimo Airport on Friday, marking the beginning of Air Canada Rouge’s four-times weekly non-stop seasonal service between Toronto and Nanaimo.

The Nanaimo Airport celebrated the special occasion with a ceremony that included speeches, ribbon cutting, cupcakes and hotdogs, while Air Canada marked the occasion by providing Nanaimo bars to passengers onboard the flight.

Mike Hooper, the airport’s president and chief executive officer, told a crowd of more than 100 people that the Nanaimo Airport has never had regularly scheduled jet airline service before.

“This is the first scheduled jet service being offered from the Nanaimo Airport and we look forward increasing the number of routes and destinations in the future,” Hooper said.

Anna McMurdo, manager of airport development for Air Canada, said the new route means residents and travellers will be able to connect to destinations beyond Toronto easier than ever before. She said Air Canada has increased seat capacity out of the Nanaimo Airport by more than 30 per cent from the previous summer.

“This summer, Air Canada will have 4,710 seats every week leaving Nanaimo to Toronto, Vancouver and Calgary. This is an increase of 32 per cent more capacity … and we are proud to be doing our part to support tourism by making it easier than ever to get to Vancouver Island,” she said.

“As we launch a new service like this, it really means an opportunity to build a route beyond a seasonal service,” he said. “That will depend on the business community to be able to support the route and ensure its long-term success.”

More than 30 people were on the inbound flight from Toronto while the outbound flight to Toronto was full, according to the airport. 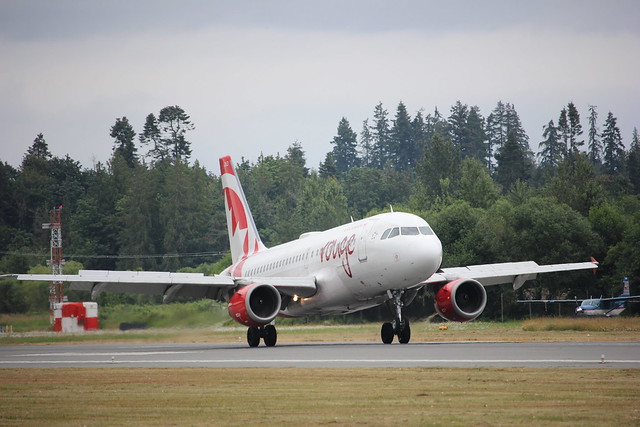